When you book with an account, you will be able to track your payment status, track the confirmation and you can also rate the tour after you finished the tour.
Sign Up
1059
12 Days
Jerusalem
Tel Aviv
Max People : 25
ItineraryTour IncludesHotelsBrochureMapPhotos

Interfaith Israel Tour – Explorer is for those who wish to explore the best sites for Jewish and Christian interests, Guaranteed to operate almost every Wednesday.

Check in at hotel.

After breakfast, visits in Tel Aviv and surrounding area will include:

Amored Corp, also know as Yad La-Shiryon in Hebrew is Israel’s official memorial site for fallen soldiers from the armored corps. It is also one of the most diverse tank museums in the world. The museum was founded on December 14, 1982, through the initiative of veteran officers of the armored corps. The outdoor display includes 110 tanks and other armored fighting vehicles, both Israeli and captured enemy examples. The armored tanks include the Merkava tank and the T-72 tanks, as well as vehicles purchased from allied nations specifically for diversifying the collection.

It is located 13 kilometers from Kiryat Gat, encompassing the ruins of Maresha, one of the important towns of Judah during the time of the First Temple, and Beit Guvrin, an important town in the Roman era, when it was known as Eleutheropolis. It is declared by UNESCO as a world heritage site. Archaeological artifacts include a large Jewish cemetery, a Roman-Byzantine amphitheater, a Byzantine church, public baths, mosaics and burial caves.

Ayalon Institute is located about 30 minutes south of Tel Aviv.The Ayalon Institute was a secret ammunition factory disguised as part of a kibbutz to fool the British back in the 1940s. Jewish people used the factory in their efforts to fight for the independent state of Israel. Between 1945 and 1948, the Ayalon Institute produced more than 2 million 9mm bullets.

Enjoy the evening at leisure.

Following breakfast at hotel, visits today will include:

Also known as “Beit Hatfusot”, which is located in Tel Aviv’s University in Ramat Tel Aviv, a district of Tel Aviv. It is a Jewish genealogy, which tells the ongoing and extraordinary story of the Jewish people throughout the centuries of time. This unique institution connects Jewish people to their roots and strengthens their personal and collective Jewish identity.

Business and entertainment districts: Also known as the “White City”, refers to a collection of over 4,000 Bauhaus style buildings built in the 1930s by a German Jewish architects who immigrated to the British Mandate after the rise of the Nazis. In 2003, the United Nations Educational, Scientific and Cultural Organization (UNESCO) proclaimed Tel Aviv’s White City a World Cultural Heritage site, as “an outstanding example of new town planning and architecture in the early 20th century.

Rabin Square: Formerly known as Kings of Israel Square; is a large public city square in the center of Tel Aviv, Israel. It has become the center for numerous political rallies, parades, and other public events. In 1995, the square was renamed to Rabin Square after the assassination of late Prime Minister of Israel Itzhak Rabin, which occurred in the square.

Jaffa’s port is considered to be 8,000 years old and probably the oldest port in the world. Visit will include the ancient ruins and the Artist Quarter.

Build in 1987, the avant-garde design with many stores, fashion boutiques and handicraft shops has its own unique pizzazz in the center of Tel Aviv. It also is visited by the weekly farmers’ market in HaTachana, a restored railway station. Trendy European restaurants sit alongside stylish bistros, and many of the area’s al fresco cafes turn into live jazz bars and cocktail lounges at night. The Suzanne Dellal Center showcases contemporary dance, while surfers head to beaches nearby.

An outdoor mall surrounded by historical buildings, with strict preservation process and now can be seen in their original beautiful historical design. Nachalat Binyami’s art fair is open twice weekly and has very unique artist flavor to it. See the hand made designs and creation, as well as the street performances, live music and coffee shops all of that makes the art fair a must see.

After breakfast at hotel, check-out from hotel and start the day with a drive north along the Mediterranean Sea towards Haifa. Visits on the way will include:

Built by Herod and once the capital of Judea. Many Christian scriptures (New Testaments) mention Caesarea; here Paul embarked on his journey to Tarsus, as well as Cornelius and his family (the first Gentile believers) lived. Caesarea is also where Pontius Pilate had his base and where Philip preached. Explore the restored Roman amphitheater, with its acoustic and theatrical sound. It was used for many performances throughout the centuries, including today. Walk through the excavated fortress and view the aqueduct, once used for conveying water to the city.

Daliat-el-Carmel, a Druze village located in the outskirts of Mt. Carmel. Here, enjoy a late lunch at a local restaurant.

Drive through the hills of the Galilee to our kibbutz guest house in the Upper Galilee for check-in.

Also know as the mystical city of Safed, it is considered to be one of the Four Holy cities according to tradition and the birth place of kabala. Safed is located at an elevation of 900 meters (2,953 ft). It is the highest city in the Galilee and in Israel. Due to its high elevation, Safed experiences warm summers and cold, often snowy, winters. Safed is built with narrow winding alleys. Visits in Safed include: Joseph Caro and the Ari synagogues, the most important synagogues in the city. See the creative workshops and galleries found in the flourishing artist’s quarter.

Return back to our hotel. Enjoy another relaxing dinner at our hotel.

Overnight in  the Galilee.

Tuesday, Day 7Sea of Galilee, Nazareth and journey to Jerusalem

Following breakfast at hotel, check-out from hotel and visit the following places:

See the remains of the mosaic floor of an ancient synagogue depicting the zodiac. The Beth Alpha synagogue was uncovered in 1928 by members of the nearby Kibbutz Hefzibah, who stumbled upon the synagogue’s extensive mosaic floors during irrigation construction.

Drive to Jerusalem and check-in to hotel.

Breakfast at our hotel. Today, visits will include sites in Jerusalem and the Old City.

Mount of Olives is situated on the east side of the Old City. On top of the mountain, is a beautiful panoramic view of the Old City and the Golden Gates. On the bottom of the mount, is an urban garden, most famous for the site where Jesus prayed in many occasions prior to His crucifixion.

The Upper Room and David’s Tomb at Mt. Zion:

Also known as the “Room of the Last Supper”, located above David’s Tomb compound. The site of the Upper Room is believed by many was the room where Jesus had His last Passover meal, prior to His incarceration.

The Jewish quarter was reconstructed after the city was unified after the Six-Day War in 1967. A special point of interest in the restored Jewish Quarter is the “Cardo”, meaning the “heart” of this ancient Byzantine City. See the unearthed (main) Roman thoroughfare and the ancient marketplace lined with columns. Visit the Roman Cardo and the Herodian quarter

Also known as “The Kotel”, or “The Wailing Wall” and “Temple Mount Wall”. The Western Wall is the last remaining structure after the destruction of the temple. It is considered the holiest place for Jews.

It is believed by many Christians, this was the site of where Jesus was born at the Church of the Nativity. Prior to visiting the Nativity, view Rachel’s Tomb.

We will return to our hotel for the remainder of the day at leisure.

Another amazing breakfast at our hotel. Today, we will visit the following places:

The Knesset is Israel’s parliament, since the creation of Israel. It officially opened in 1950, but was functioning withing the first year of Israel’s creation with several locations in Tel Aviv and Jerusalem.

A cemetery for all of Israel’s falling soldiers, leaders and Prime Ministers.

Israeli memorial (museum) commemorating the 6 million Jews who perished in the concentration camps in Europe by Nazi Germany. It is considered the biggest memorial for the Holocaust victoms.

A vibrant ultra orthodox neighborhood in the heart of Jerusalem. See a unique lifestyle and culture with many Judaica shops, restaurants and a very busy street.

Drive to an authentic restaurant (dinner included), followed by a spectacular Sound and Light show at Tower of David Museum.

Following an early morning breakfast at our hotel, drive south towards the Dead Sea. As we get closer to the shores of the Dead Sea, we will start to descend to the lowest point on the surface of the earth. The descent is 1305 feet (398 meters) below sea level. Visits in the Dead Sea region will include:

Ascend by cable car to the legendary mountaintop plateau of Masada. Where the last stronghold of the Jewish Zealots struggled against the Romans. The Zealots held out for three years against the legions of Flavius Silva. They chose to die as free men at their own hands in preference to Roman slavery and torture.

The Dead Sea is considered the lowest point on earth. The Dead Sea is uniquely formulated in a small body of water (similar to a lake) and includes 11%-13% salt and other natural ingredients. Float on the Dead Sea and cover ourselves in mud (weather permitting).

Drive back to our hotel in Jerusalem.

Enjoy breakfast at hotel and Shabbat (Saturday) day at leisure.

After breakfast, transfer to Ben Gurion Airport for departure. 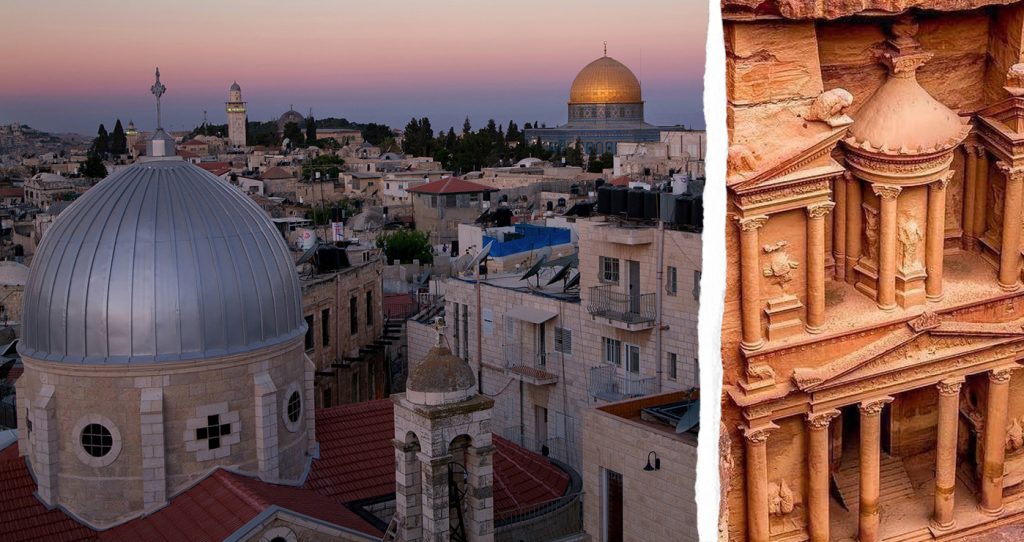